“Warren Station COVID Comedy Series” – Warren Station and Comedy Works (Denver) have partnered to bring comedy back to the high country this fall! Join us to witness some of the top comics in Colorado right in your backyard of Keystone.  This show’s opener will be Talon Saucerman getting the show kicked off for Louis Johnson, who is the night’s headliner.  What better way is there to start your weekend than relaxing with a few beverages and fantastic entertainment? Get your tickets today at warrenstation.com! 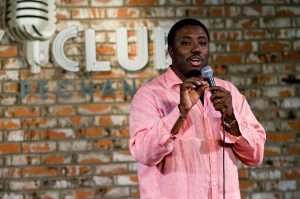 LOUIS JOHNSON is “owner of the gift that every comic craves—the ability to draw the long, hearty laughs from start to finish,” raves CBS TV. This man “leaves no doubt as to how much he enjoys performing standup. Just listen to him laughing along with the audiences. No subject is off-limits for this…winner of Showtime Network’s ‘Funniest Person in America.’ His satchel of side-aching funny material is filled with topics ranging from parenthood to politics.”

One night on his way home from his fast food job, Louis happened to walk into a downtown comedy club. It reminded him of the time he spent as a teenager in a summer program that sent him and his friends out to perform sketch comedy shows for nursing homes, daycare centers, and juvenile hall detention centers. That bit of nostalgia prompted him to come in the next night and sign up for new talent night. Two weeks later, he was on stage.

With several upcoming television, film, and theatrical appearances, Louis states that he will never give up the stand-up comedy arena. “Standup is pure,” he says with a sly smile. “On a movie or television set everyone has a suggestion about what you say and how to say it. But when it’s just you, the audience, a microphone, and the possibility of a true, one-of-a-kind, raw, naked shared experience—and it’s funny—nothing, and I mean nothing, can beat that.” 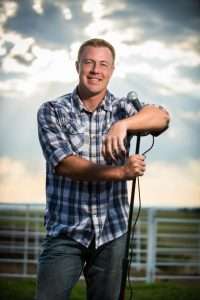 Talon Saucerman Just a good ole boy from South Dakota. Talon left his family farm seeking fame, fortune and cheap whiskey along the way. His small town upbringing lends a unique perspective on the world outside his sheltered childhood. His wide eyed optimism, borderline naive approach on life entertains crowds across this great nation of ours.  Armed only with a public education, the knowledge of what his “Grampa always said”. Talon is an internationally touring comedian and regular at the world famous Comedy Works in Denver, CO. He has also been featured on the DIY Networks, Cool Tools.

Please double check the show time of your ticket below to ensure you purchase tickets to the show of your choice. See you at Warren Station!