Warren Station and Comedy Works (Denver) continue to bring laughs to the high country!  Tonight’s opener is Andrew Orvedahl and our headliner is the hysterical Ben Roy. Is there a better way to end a day out on the slopes than with some hilarious entertainment in the village with your friends and family? Get ready to have a grin slapped on your chin!

We offer 2 different types of seating, Reserved table seating with your party (buying all your seats at once) or GA (general admission) stadium seating up front.  If you are seeking reserved table seating, please purchase tickets with your entire group.  We can accommodate 2 top reservations and up to 12 top reservations. Seating changes are not permitted day of the show.

Doors are at 7:00 pm, show starts promptly at 8 pm. Please arrive prior to 8 pm so as to not disrupt the show. We will take a quick 15-minute “Belly Break” intermission following the opening comedian. Get a drink, grab your seat, and settle in for 1 full hour of comedy with the headliner.

About the Comedian:  Ben Roy 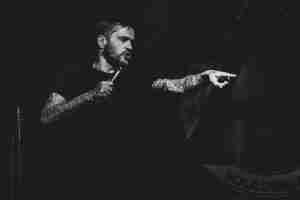 If you aren’t familiar with Ben Roy, he’s been taking comedy audiences by storm since 2004, bringing unparalleled energy and a unique voice to the stage. Often compared to Lewis Black or Bill Hicks due to his passionate, ranting approach, Roy has a style that is definitively his own.

Roy cut his comedic teeth in Denver at Comedy Works. Since then, he has been selected to perform at many comedy festivals and has been featured on HBO’s Funny as Hell series; as well as on the Comedy Central shows Adam DeVine’s House Party, Corporate, @midnight, and This Is Not Happening. Ben has released three stand-up comedy albums and was listed as one of Variety’s Top 10 Comics to Watch in 2015. He just recorded his first-hour comedy special with 800 Pound Gorilla Records at Comedy Works Denver in June 2022. Keep an eye out for its release date.

Along with fellow Denver Comedians Adam Cayton-Holland and Andrew Orvedahl (who collectively perform as The Grawlix), Ben created, writes, and stars in TruTV’s original comedy series Those Who Can’t, which ran for three seasons. In addition to stand-up comedy, Roy is a prolific musician, currently the lead singer of SPELLS.