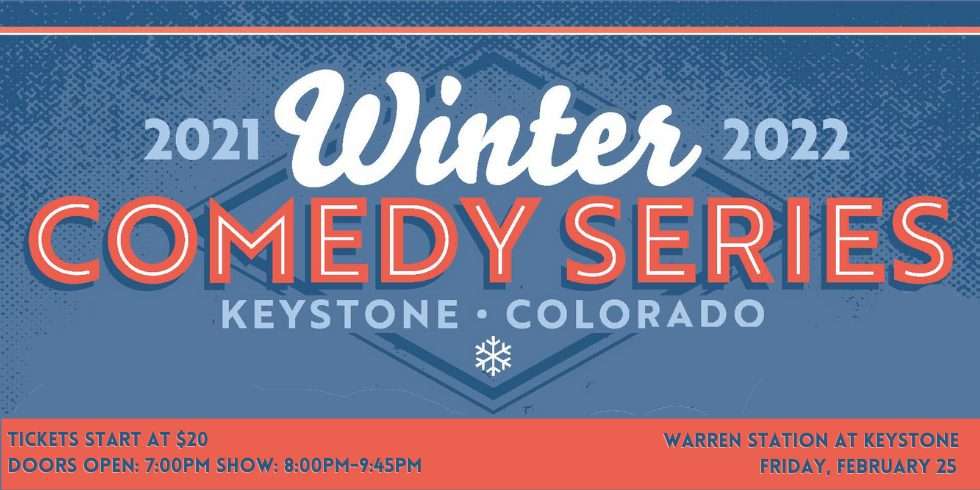 Warren Station and Comedy Works (Denver) continue to bring laughs to the high country! Join us at Keystone Resort and learn what it means to have your gut busted. That’s right, our comedians will leave you in stitches, (not literally).

The night’s opener, Dē Kelly will loosen up the crowd for headliner, Sam Tallent. Is there a better way to end a day on the slopes than with some hilarious entertainment in the village with your friends and family? Only with one of our legendary cocktails served thru the entire event! Don’t get “laughed” out!

Tickets start at $20.00. Doors are at 7:00pm, show starts promptly at 8pm. Please arrive prior to 8pm as to not disrupt the show. We will take a quick 15-minute “Belly Break” intermission following the opening comedian, Dē Kelly . Get a drink, grab your seat and settle in for 1 full hour of comedy with the headliner Sam Tallent.

Dē Kelley has been a stand-up comedian for over 12 ears. He has been featured on PBS, performed on the 2019 Highplains Comedy Festival and released a stand-up Comedy Album entitled “Salutations”. Dē Kelley first caught the comedy bug while doing skits for his track team in college. He got his first laughs in front of an audience and was hooked. He began honing his skills at open-mics and showcases throughout the Country quickly becoming one of Denver’s premiere up and coming comedians.

Known for whip-quick wit and rollicking improvisations, Sam Tallent is one of the sharpest, most original rising talents in comedy today. Tallent has been called “the absurd voice of a surreal generation” by The Denver Post. He has worked alongside many of the biggest names in comedy including Louis CK, Dave Chappelle, Doug Stanhope, Dana Carvey, Hannibal Buress and TJ Miller. Sam is also a founding member of fearsome comedy gang The Fine Gentleman’s Club, which hosts Denver’s premier weekly stand-up showcase, Too Much Fun! Sam has performed at various comedy festivals including the Oddball Comedy Festival, High Plains Comedy Festival, Hell Yes Fest, the Chicago Comedy Expo and the NY Film and Television Festival. He was recently featured on the VICE TV series FlopHouse.