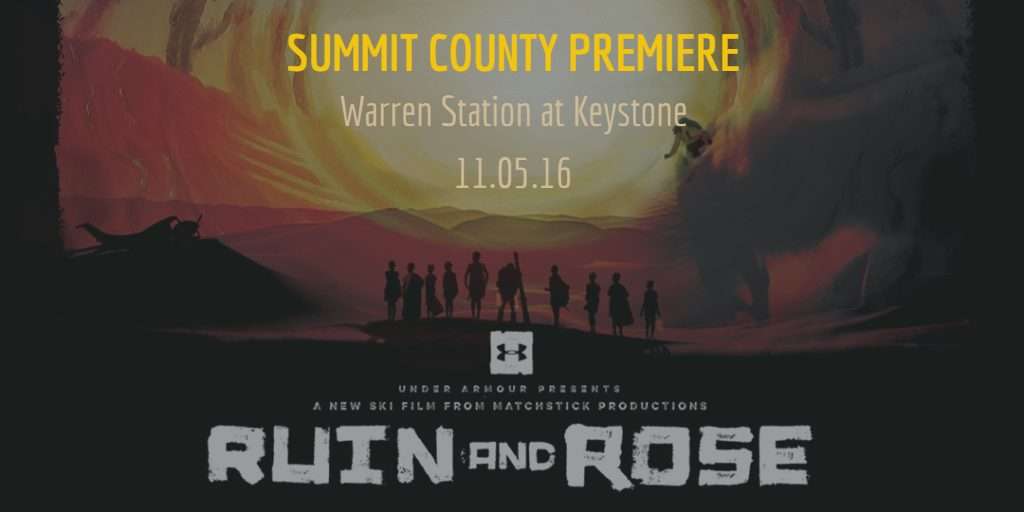 GET STOKED WINTER FILM SERIES KICKS OFF ON NOVEMBER 5TH WITH MSP’S FILM RUIN AND ROSE.

Warren Station at Keystone’s, Get Stoked Winter Film Series is paying homage to winter and celebrating Keystone’s opening weekend on Saturday, November 5th with the Summit County Premier of Matchstick Production’s 2016 film Ruin and Rose to benefit Team Breckenridge Sports Club and Team Summit Colorado. The movie is so good there’s got to be two showings at both 6PM and 8:30PM. Get stoked for another ski and ride season as legendary shredders tackle unforgiving territory on the big screen. You know the drill. Rad skiing, music and giveaways including items like lift tickets along with Red Bull, beer and “Bring on the Pow” drink specials are destined to get you hyped for the upcoming season! Ticket sales open at 5:30pm with the feature film at 6:00pm. Tickets are available at the door are and are a “Get Stoked” price at $15.00 and little shredders 5 and under are FREE. General admission seating. “Keep your ski tips up and get your bases in the air!” Warren Station will continue the Get Stoked Winter Film Series with LEVEL ONE’S production: PLEASURE gracing the big screen on Saturday November 12th.

RUIN AND ROSE: A surreal future leaves the world without water and consumed by sand: the Big Empty. A group of children survives alone on the edge of the endless desert in the ruin of the now. When a young boy unearths an ancient relic hinting at the lost wonders of winter, he sets off in search of the ghosts that once called the mountains their home. This bold cinematic experience balances stunning skiing with a wild and hopeful journey into the forgotten lands of myth and magic beyond the Empty.
Acclaimed writer/director Ben Sturgulewski joins the award-winning team at Matchstick Productions and their two decades of filmmaking expertise to deliver “RUIN AND ROSE,” an epic creative vision brought to life by the talents of the world’s top skiers. Winter landscapes across the planet contrast seamlessly with a thoroughly-crafted story of environmental apocalypse, shot entirely within the otherworldly expanses of Africa’s Skeleton Coast. Unlike anything seen before, the dreamlike setting of this film sparks the imagination of not only action sports enthusiasts, but anyone with a beating heart.

Hot dogs, drink specials and the Epic Mix Photo Booth with free pics and prizes including concert, festival and lift tickets are just part of the mix. The evening will offer two showings at 6:00pm and 8:30pm with doors opening thirty minutes before each film. Tickets are available online and are a “Get Stoked” advance price at $12.00 and free for ages five and under per show. Advanced purchase is highly recommended. General admission seating. Tickets, if available at the door, will be $15.00 for, while five and under will receive free admission. Proceeds from ticket sales will be divided between Team Breckenridge Sports and Team Summit Colorado.

Keystone Acoustic Sessions; Feel the vibes of our incredible Mountain Village.
Q&A: WITH TWO OF OUR PREFERRED VENDORS
TOP 5 TIPS TO ENJOYING YOUR SUMMIT COUNTY SUMMER
EMAIL SIGN UP