Keller Williams Returns for Fifth Year and will team with members of Leftover Salmon, the Motet and the String Cheese Incident for a two-night run in Warren Station at Keystone on Friday, December 16th and Saturday, December 17th.

Every anniversary is momentous, so that is all of the more reason for Warren Station and Keller Williams to celebrate their fifth year with a serious lineup of musical stamina and ear-pleasure.  After all, the two have survived the greatest obstacle that anyone could endure …THE END OF THE WORLD.

Keller Williams began his first concert run in Warren Station on December 21st, 2012 and dubbed the show, “Defyin’ the Mayans” when an ancient prophecy lead some to believe that doomsday was upon us. It wasn’t.  (Cue air, high-five). Despite fears of a planet collision with Nibiru, the solar maximum or a catostrophic shift in the earth’s rotation, Keller and His Compadres kept playing and super fans kept grooving.  In an interstellar junction of harmony, we defied predictions. We had made it.

A little more on Keller…

Since he first appeared on the scene in the early ’90s, Williams has defined the term independent artist. And his recordings tell only half the story. Keller built his reputation initially on his engaging live performances, no two of which are ever alike. For most of his career he has performed solo. His stage shows are rooted around Keller singing his compositions and choice cover songs, while accompanying himself on acoustic guitar. With the use of today’s technology, Keller creates samples on the fly in front of the audience, a technique called live phrase sampling or looping, With nothing pre-recorded, the end result often leans toward a hybrid of alternative folk and groovy electronica. A genre Keller jokingly calls “acoustic dance music” or ADM.

That approach, Williams explains, was derived from “hours of playing solo with just a guitar and a microphone, and then wanting to go down different avenues musically. I couldn’t afford humans and didn’t want to step into the cheesy world of automated sequencers where you hit a button and the whole band starts to play, then you’ve got to solo along or sing on top of it. I wanted something more organic yet with a dance groove that I could create myself.”

Williams’ solo live shows—and his ability to improvise to his determinedly quirky tunes despite the absence of an actual band—quickly became the stuff of legend, and his audience grew exponentially when word spread about this exciting, unpredictable performer. Once he began releasing recordings, starting with 1994’s FREEK, Williams was embraced by an even wider community of music fans, particularly the jam band crowd. While his live gigs have largely been solo affairs, Williams has nearly always used his albums as a forum for collaborations with fellow musicians.

Tickets are $30 per night or $55 for a two-day pass and are available on September 13th for fan club members at www.kellerwilliams.net. Public sales begin on November 1st at www.warrenstation.com.  Some fans have mentioned that they are especially grateful that the ticket price has not changed since the first show, five years ago. One Keller William’s follower noted that, “The ticket price is unreal, and still what it was in 2012.  That’s huge, because the show keeps getting better and better.” Historically, both nights have sold out before the event date(s).

The Warren Station team, along with many members of the general population, are especially glad that Judgement Day is on-hold and that the show continues to return to Keystone.  (Again, air, high-five).  Now, “FREEKs” and music-lovers get to enjoy Keller Williams and His Compadres for many more years to come. 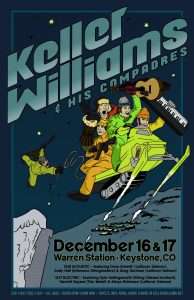